Top 30 Tough Chicks on Film: A Salute to the Female Action Hero 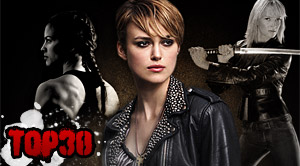 Did you know that film acting schools teach you how to deliver a great action hero performance?

It happened in the mid ’80s, when Sigourney Weaver took on the acid-blooded alien in James Cameron’s Aliens, that women stopped being the objects of desire or the manipulative bitches, the helpless victims or sexy seductresses, and began to take leading roles in action pictures, kicking ass just as well as the greatest male action heroes.

Although actresses such as Pam Grier as Foxy Brown were breaking ground in the ’70s, it wasn’t until Aliens that women were kicking butt in the mainstream. They had the occasional part, like Grace Jones in Conan the Destroyer that showed some toughness, but they weren’t the main ticket unless they were a superhero of some sort (Supergirl, Red Sonja) to make their toughness believable.

No, it took Sigourney in a front-end loader knockin’ the brains out of an alien to break open the idea that a female can lead in an action film. Once she did it, the floodgates opened and women have been wasting bad guys with guns and fists ever since.

We at Yell! Magazine find the last 30 years the most exciting in film. We love a woman who stands up for herself. We find women, who need no man to protect them, the most attractive females today. With that in mind, here are our choices for the best tough chick roles over the last three decades.

This tough chick works for the Internal Affairs Dept. of the LAPD and takes no guff from anyone. Kicking the ass of five bad guys impressed Martin Riggs so much he married her.

Having an uncanny ability to kill vampires gives this beautiful teen cheerleader the responsibility of protecting her town from a infestation of the blood sucking beasts. Buffy uses her gymnastic ability along with the usual anti-vampire weaponry (stakes and so on) to dispatch every fanged monster that stands in her way.

Natalie, with her two partners, uses martial arts and sex appeal to protect their mystery boss Charlie from a group trying to kill him. She takes on all comers including the infamous Thin Man.

Dylan is back kicking male ass all over the screen in a second Angel’s movie. This time she, with the help of her two partners, must stop ex-Angel Madison Lee and the Thin Man from selling the government’s witness protection database to the highest bidder.

Turning her life around wasn’t in her life plans, but after taking a bullet to the leg and kicking the ass of her jailer she became Nina, one of the CIA’s ultimate assassins. She even had the balls to leave the profession on her own terms.

Seeing her husband killed on her wedding day causes CIA agent Kathy Gallagher to hunt down the murderer. Being raped and beaten, and then thrown out onto the side of a road doesn’t deter this tough chick from recovering, then confronting and defeating the arms-dealing bad guy.

She is a bar owner who moonlights as a bounty hunter in a futuristic USA during a second civil war. She (Pamela Anderson) uses guns, fists, and sexuality to get what she wants and not even a fat kingpin or Nazi-like general can stop her when she decides to help a resistance leader escape to Canada.

An assassin charged with killing the leader of her world, Aeon Flux is a powerful force that can’t be stopped. Using all the technology of this future world along with an expertise in martial arts and weapon’s training she almost succeeds until she finds out the secret truth of her perfect society.

A female Indiana Jones who kicks ass better than the original, Lara takes on a secret society who wishes to rule the world. An ambidextrous gun-toting karate expert who looks good in tight clothing with a sexy British accent, what’s not to be impressed about?

Gun slinging is the name of the game for this blond tough chick. Riding into a town run by her father’s killer, Ellen arrives bent on revenge. She enters a gun fight tournament taking place at the time and must face both her nemesis’ henchman and son before facing the murderer himself.