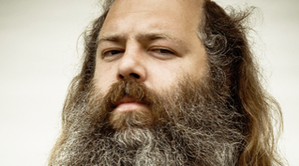 Slipknot was formed 1995. Playing in Des Moines, Iowa, the band got their break when Roadrunner Records heard their 1996 self-released (and distributed by -ismist Recording) Mate. Feed. Kill. Repeat and signed them soon afterward. After playing at Ozzfest and releasing Slipknot (1999) and Iowa (2001) on the aforementioned Roadrunner label, Slipknot has gained a large fan base. Their 2004 release Vol. III: The Subliminal Verses was produced by the legendary Rick Rubin.

With Slipknot’s use of Rubin’s production skills, they have made a statement that they want to blaze a trail through the heavy metal jungle as Slayer once did a decade earlier. Rubin is rap’s greatest producer. He is also one of the most influential people in bringing metal and rap (and a mixture of the two) to mainstream audiences. Slipknot made a wise choice with Rubin and it shows on Vol. III: The Subliminal Verses.

Speaking of Rubin, because he works behind the scenes, he doesn’t get the recognition he deserves. We at Yell! Magazine have decided to change that and give our readers the dope on this musician, mixer, producer, executive producer, and record label owner.

Rubin was born Frederick Jay Rubin on Long Island, NY, in 1963. While attending college (at New York University) he founded (with Russell Simmons) Def Jam Records. Little did he realize that Def Jam would become hip-hop’s greatest label replacing Sugarhill Records of NJ as the place to be in the rap world. Although Simmons and Rubin parted ways a few years later with Simmons taking over Def Jam, Rubin didn’t quit. He started a new label called Def American (later to be shortened to just American) and made his name felt not only in hip-hop circles, but also in country, rock, and even electronic/industrial music. Rubin has expanded his reputation to almost god-like status.

Here are some of the albums that made and continue to make Rick Rubin one of the most sought after producers in music history:

Originally a punk band, the Beastie Boys changed their music and became raps greatest and first white artists. Their mix of rap and rock spawned the crossover hit “You Gotta Fight for Your Right to Party.” The single was on this album and as a direct result Licensed to Ill became the first rap album to reach Number One on the American charts.

Until Slayer left Metal Blade Records and signed with Def Jam and had Rubin produce their greatest album to date (this one), they were not much thought of in metal circles. Rubin uses the magic he created on rap albums Raisin’ Hell and Licensed to Ill to propel Slayer as one of the greatest thrash bands of all time with only Metallica and Megadeth offering any competition. Slayer would thank Rubin by joining him on Def American after his split with Simmons. Rubin would go on to produce (or be the executive producer on) all of Slayer’s future albums.

This is AC/DC’s only great album since Back in Black 15 years earlier. For Those about to Rock, the album followup to Back in Black, was a commercial success but it didn’t take long for the buyers of the album to come to the conclusion that the sales were as a result of Back in Black’s post appeal rather than the album’s stellar music. With the hiccup known as The Razor’s Edge in 1990 being the only album up to Ballbreaker to have any songs of worth (actually only one, “Thunderstruck”), AC/DC needed some help. Why they waited until ’95 to enlist Rubin is a question that has been asked by many, but they are thankful they did.

NIN: Further Down The Spiral produced by Rick Rubin

Rubin shows his expanding versatility by entering into the industrial music of Trent Reznor. Used as a vehicle for Reznor’s single “Hurt,” Further Down the Spiral becomes more than just a remix of songs off of NIN’s follow-up to Pretty Hate Machine (aptly called The Downward Spiral). Rubin works his magic to make this album at times better than the original.

Take Rage Against the Machine, remove singer Zack De La Rocha, sub in Soundgarden vocalist Chris Cornell, and you have Audioslave. Rubin makes this meshing of musicians from different fields endeavor sound competent if not stupendous.

In order to get themselves to the next level, Slipknot knew they needed someone of Rubin’s stature to propel them to nu metal stardom. With Rubin’s experience in both fields of metal and rap, Slipknot knew the producer could make Volume III: The Subliminal Verses their greatest effort to date. Rubin succeeded in bringing the band’s focus back to the thrash their fans were waiting three years for. Getting sidetracked with other projects since Iowa in 2001, the group’s various members were looking like Slipknot was their side project rather that the reason for their success. Volume III shows what a great producer can do for a band that hadn’t seen each other collectively for approximately 36 months.

Rubin would go on to produce such greats as Metallica and Weezer and made the older Generation of Johnny Cash and Neil Diamond relevant again. When the new Red Hot Chili Peppers album is released, Rubin will again show what a talent he is.