Yakuza 4: Can You Survive the Dangers? Plus, Download an Exclusive Wallpaper From SEGA 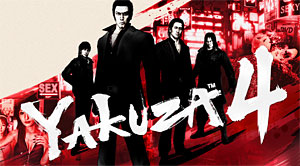 Can you handle being stabbed in the back by your bodyguard, your closest friend or even a family member? Well, if you can, you might just have the sins to be a Yakuza crime member. In North America, we are all familiar with traditional mafia movies like The Godfather, Goodfellas, and Scarface and from them we know that one thing is for sure and that absolute is consequences. See, you start at the bottom of the food chain, you work your way up to become a kingpin, and then you possibly lose all your power because of your arrogance.

Traditional organized crime in Japan is run by Yakuza members, also known as gokudō, and the bosses have nearly the same flaws as their North American counterparts. This subject is also extremely popular in Japan and is very well expressed in movies, television, and video games such as Yakuza 4 by SEGA. One compelling aspect of the Yakuza genre is all the twists and turns on offer. At times, the stories are so confusing that you need to rewatch them to really understand them. If you’re already curious, stop reading this and just go watch The Yakuza Papers Vol. 1 through 5. If you want something a little more straight forward before you start playing the game, we highly recommend watching Takeshi Miike’s remake of Graveyard of Honor or Fudoh: The New Generation.

Yakuza originally released in Japan as Like a Dragon is an action-adventure video game with all the bells and whistles. Unforgettable battles, hookers who are very well illustrated in the art so far and, of course, all the murders. Yakuza 4 pretty much covers all the taboos in the underground world of Tokyo. So, you should ask yourself will you survive the dangers of Yakuza 4?

North American fans of the Yakuza video game series and exclusive to the PS3 were shocked when SEGA first revealed the new box art for Yakuza 4. Apparently, it’s rare when a Japanese video game hits the U.S. market and the box art is cooler than the one released in Japan. It was so good that the fans requested a high res release of the art. A wallpaper for Yakuza 4 is now available for you to download, which is a testament to how damn nice the folks at SEGA are — plus they want to keep everyone on their toes until the official release in Spring 2011.

Click and save the image below to your desktop and enjoy it until we cover more news.