Jesse Bongfeldt Following in the footsteps of Georges St-Pierre? 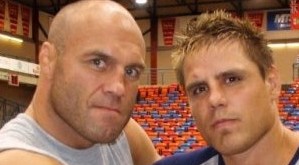 Now that the Rafael Natal camp has announced that Jesse Bongfeldt will be their opponent at UFC 124, the question many MMA fans north of the 49th parallel (especially fans of the now defunct TKO) have been asking themselves lately is: Will Bongfeldt make as big of an impact on the UFC as Georges St-Pierre did when he left the TKO welterweight belt open and decided to concentrate his efforts on UFC glory?

Jesse Bongfeldt fought Chris Clements for the vacant title in September ’07, winning easily in the second round with a Rear-Naked Choke sub. He defended his title against TJ Grant and is now TKO’s last welterweight champion.

Since TKO’s demise, Bongfeldt has been keeping busy under the RITC and CFC banners but hasn’t fought since September ’09. This will be his first fight for the UFC.

It will be very tough for Bongfeldt to copy the success of St-Pierre, but it will be fun to watch him try; especially if you’re a fan of the subs, which Bongfeldt is known for.