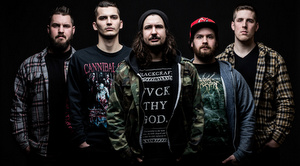 It is time to get your Canadian metal on! British Columbian-based The Mountain Man have finally released their debut EP, Bloodlust, and it is a lesson in brutality!

If you’re smart, you’ll head over to the band’s Bandcamp page to stream and order the EP.

Their EP is a five song onslaught featuring the title track alongside their breakout single “Open Graves.”

In addition to their new EP, The Mountain Man recently won Wacken Metal Battle Canada Round III in Vancouver and will advance to the semi-finals.