Interview With A Haunting In Cawdor’s Allie DeBerry 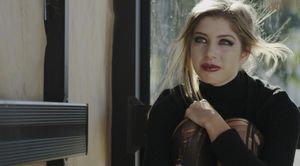 Allie DeBerry is best-known for her role as Paisley Houndstooth, the dimish pal of Lexi Reed on TV’s A.N.T Farm. In an effort to prove her range beyond the Disney Channel, DeBerry has now branched out into horror movies (it worked for Emma Roberts!) with a key role in the big March release A Haunting in Cawdor.

The movie also stars Cary Elwes (The Princess Bride, SAW), Shelby Young (Nightlight), and Michael Welch (Twilight, Star Trek: Insurrection), and tells a tense tale of psychological terror. Vivian Miller (Young) is a young 20-something woman who’s serving out her jail sentence at a work-release program in the Midwest. Her 90 days of probation takes her to The Cawdor Barn Theatre, a dilapidated summer stock theater run by Lawrence O’Neil (Elwes). Lawrence, a failed Broadway director, is now reduced to staging amateur productions with young parolees and raging over the mistakes from his past. Vivian’s arrival in Cawdor starts a terrifying series of events that brings Lawrence’s secret past to the present. After Vivian views an old taped stage production of Macbeth, a force of evil is unleashed which soon turns its sights on her. With the help of Roddy (Welch), a local outcast, Vivian sets about trying to discover who the supernatural killer on the tape is before she becomes the next victim.

You must be riding high off the success of Lazer Team? Did you see its success coming?
Lazer Team has been making history and I’m so honored to be a part of the success. Immediately, I thought the script was hilarious, and I knew with all the outrageous stunts and the fan base that Rooster Teeth has that it would be a sure hit.

Clearly you don’t like to be pigeonholed – you’re now in a rather creepy horror movie. What interested you about A Haunting in Cawdor?
I certainly don’t ever want to be pigeonholed in my career, which is what initially drew me to A Haunting in Cawdor. I had never done a horror film prior to it, and I was really interested in what goes [on] behind the scenes in making one.

Could you relate to your character?
My character is a past theater student, so I can relate to her there. But she is struggling and dealing with something a lot more intense than I could ever imagine. So it was a nice challenge for me to step into her shoes and forgo what haunts her.

The theater is a big element of the movie. Had you done theater before?
Theater is a huge component in the film, and surprisingly I have not done a ton of theater. I did a few plays a while back- Little Shop of Horrors being my favorite. I played Audrey. So while most everyone on set was big into theater, I was not as familiar. I remember accidentally saying “Mac Beth” in the Barn theater and everyone had a fit as that is supposed to curse the play. I thought it was pretty funny; I was just clueless.

Can you talk about working with the legendary Cary Elwes?
Unfortunately, I did not get to spend much time working with Cary Elwes while filming — it was more of just a brief introduction as none of our scenes were scheduled the same day. Shelby Young and Michael Welch were a real treat though, really kind people. I also enjoyed working with Phil Wurtzel, our director. He wrote the film as well, so if I had any questions he was always quick to help as he had written it and knew exactly what he had envisioned.

Has being in a horror movie whet your appetite for doing more?
Being in a horror film was exciting yet exhausting since my character has such high emotions the whole time. I had to get myself worked up before every scene, so by the end of filming I was completely drained. It was great for me acting-wise to have to keep it up and I think was good a good challenge for me acting-wise.

What’s your favorite scary movie? (Imagine we asked you that in “Ghostface” voice)
I’ll be honest, I do not watch many horror films (I know, I’m a wimp). You would think I wouldn’t be as scared of them now that I have been in one and know all that happens behind the scenes, but that is just not the case. The only one I can really think of was seeing Orphan when I was younger and that tripped me out, haha.

A Haunting in Cawdor will open in theaters and on-Demand on March 11th.