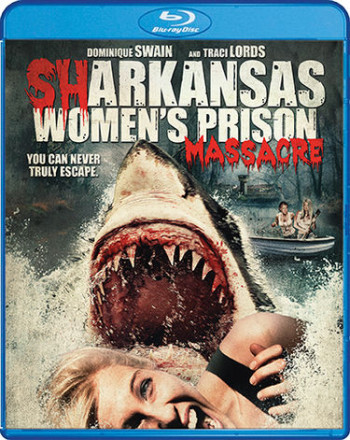 Not long ago… OK, it was nearly a year ago, we brought you the first-look trailer for the Jim Wynorski-directed genre slamming Sharkansas Women’s Prison Massacre. At the time we were over the moon about the potential of this B-movie sharkfest, hailing it as something destined for cult-status greatness. Unfortunately, we still haven’t seen it.

Our lack of viewing, however, might soon change as the movie is headed for Blu-ray and DVD on May 3, 2016. It’s a work-in-progress right now, so no extras have been announced, but we’ll try to let you know as soon as we get word.

When a fracking mishap accidentally rips apart the earth’s crust, the resulting hole opens up a gaping underground waterway to a vast and mysterious ocean somewhere deep below. Instantly, giant prehistoric sharks begin wending their way upward toward a murky bog in the heart of the Arkansas Bayou. Unfortunately for a group of female prisoners on a work detail in the swamp, the deadly sharks attack without warning – pinning a hapless group of intended victims in a small deserted cabin in the heart of the wetlands. Death may be the only means of escape!