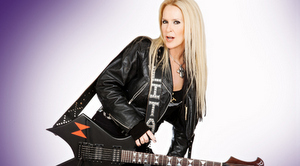 Did you cut your heavy metal teeth on ’80s metal? Then, at one point or another, you probably crushed on Lita Ford. Or at the very least you had fond appreciation for her metal hotness.

Lest we forget (and feel free to scroll down to get the news):

If you’re noticing a punk influence on some of Ford’s earlier material, and if by chance you don’t already know this, it’s because her first run at success with with The Runaways, which also featured Joan Jett within its ranks.

OK, that’s enough reminiscing, let’s get to the news at hand. Where this “new,” raw material came from, Ford explains:

There was a shitload of these 24-track analog tapes in the closet in my house (in the islands). This is some of the best work I’ve ever done and it was sitting there. I grabbed two suitcases and took them back to the United States. We could bake these fuckers [due to their age]. If you just put them on the reel, they would flake. I was chewing my fingernails, thinking, ´Please work! ` And they did!

Time Capsule contains 10 songs plus an intro and will be available as a digipak as well as an LP version and download. It’s Ford`s gift to fans who love the ’80s, when thrilling vocal performances, raunchy riffs, and loud, growling guitars were as essential as oxygen. Time Capsule is available for pre-order here.

More dates will be added soon.