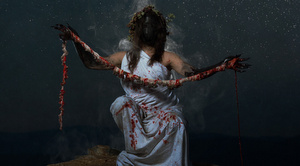 Kelowna, BC’s death metal conjurers, Gomorrah, are streaming their new album, The Haruspex, in its entirety over at Bravewords.com. So, you know what to do if you’re in the mood for some Canadian heavy. With metal this good, we can forgive a certain band member for looking like a former member of Tears for Fears.

The Haruspex will be released next week, January 15, 2016, via Test Your Metal Records and can be pre-ordered here.

Jeff Bryan and I recorded the album at my home here in the Okanagan Valley, and we did the absolute majority of the writing in the pre-production and production stages. So much of the material had existed from several years ago, but was completely overhauled and reworked several times to end up in these tracks. We weren’t afraid to try things out and work over several revisions, or to take our hands off of a few of the songs that we felt very comfortable with after only the first revision. Jeff wrote the lyrics for the tracks in less than two months, and a lot of them were written and finalized in the vocal tracking stage, in front of the microphone. We weren’t afraid to enable our music with production techniques. Many reviews have figured that we used samples or synthesizers in the songs, however the reality is that all of these droning noises, stutters, and otherwise ‘industrial’ sounds are actually either electric guitar or bass guitar, and abusing these instruments in front of their amplifiers with only two guitar effect pedals. The rest of these noises you hear are the interaction with the instrument and their environment. We then delivered all of the tracks to Stuart McKillop of Rain City Recorders for mixing, and he blew us away. It didn’t take him long at all to catch onto what we were going for, and his consistency from one track to the next brought the tracks to the highest musical apex they could reach. Brad Boatright of Audiosiege handled the mastering, and he made certain that the product was of the outstanding final production quality for us. Brad has really yielded an outstanding quality for so many other abrasive sub-genres of metal and hardcore and he delivered that exact pinnacle of quality for us on this record as well.