Contrarian Cover The Iconic Death Track, “Nothing Is Everything” 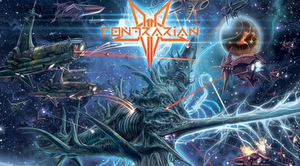 Progressive death metal super group, Contrarian, have released a cover of Death’s “Nothing Is Everything.” Aside from some deeper and less intelligible growls, a “cleaner” guitar tone, and a “better” recording, this is a pretty honest and brutal cover.

The track can be found on Contrarian’s forthcoming debut album, Polemic, which is scheduled for release on November 20th. Album pre-orders can be made here. The following cover of Death’s ‘Nothing Is Everything’ is a tribute to the memory of Chuck Schuldiner and, as described in the lyrics, to those who have suffered at the hands of mental illness such as many forms of depression, Alzheimer’s, and Parkinson’s. The band went to great lengths to authentically recreate this song off Death’s Individual Thought Patterns, which many consider their most groundbreaking and progressive release to this day. The solo on this track was dissected and reconstructed by guitarist Brian who was also the primary architect in pre-engineering the overall guitar sound on Polemic.

And, of course, don’t forget to check out the Death original: