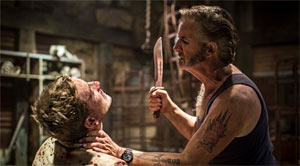 It has finally begun horror hounds! Production has officially kick started for the six-part drama series, Wolf Creek. A psychological thriller based on the same world as the films, but things are shifting into different gears this time around. Mick Taylor, the villain, is targeted by a young female tourist after her family gets viciously slaughtered.

Mick Taylor targets an American tourist family to terrorise and destroy. But the tables are turned when 19-year-old Eve survives the massacre and starts to rebuild her shattered existence by embarking on a mission of revenge.

Besides knowing that production is moving forward, the full cast of the miniseries has also been revealed in a press release. The malevolent Outback killer will be played again by John Jarratt and Australian Lucy Fry will star in the lead role of Eve. The other cast includes Dustin Clare, Deborah Mailman, Miranda Tapsell, Jessica Tovey, Jake Ryan and Richard Cawthorne.

The Wolf Creek miniseries is expected to debut in mid-2016 exclusively on the streaming service Stan.