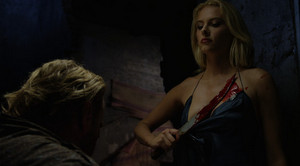 Then I had the pleasure to speak to writer/director James Cullen Bressack over the phone to talk more about Pernicious. At just 23 years old, the young filmmaker already has an extensive list of credits to his name, and there’s more in the works. It might be too early to call, but if Pernicious is any indication, James is a horror director to keep an eye on.

But let’s just get on with the interview!

So, your new movie Pernicious has been made widely available today! Tell us where people can see it or how they can get a hold of it.
Now it’s out on DVD everywhere in America and Canada. It’ll be in Wal-Mart in Canada today too. It’ll be on Netflix pretty soon. [It’s also on] Google Play, Amazon, iTunes, Sony PlayStation, and Xbox and all that.

Can you share for our readers the film’s premise?
Three girls go to Thailand and awaken an ancient evil and have to try to find a way to battle the spirit world while battling their own demons. Where did the story’s inspiration come from?
I was approached by the producers, they’re an American- and Thai-based company, and they wanted me to make a horror movie based in Thailand. So, I started doing research and I found that there’s such a rich heritage in Thailand, but there’s also this ancient black magic history that’s there. One of the things that I looked into was this golden statue called the Kumari. They used to think it was, like in the 1800s, they used to think it was good luck to encase a child in solid gold because it would trap the spirit in the body, and I was like, “Oh, that’s a horror movie!” They usually did this with babies, but I took some creative license and did it with a live, solid gold girl. Is the legend within the movie a real one?
It’s not a legend, it’s an actual thing. It didn’t have to have a violent death, and in the actual practice they would cover the person in Nam Man Phrai, which is basically the blood of tortured animals. Instead I did the blood of tortured humans because I didn’t want to hurt any animals (laughs).

OK, credit has to be given to your special effects team because the blood, the cutting, and the gore in general looks great! Can you talk about your team and the effects process? Did you use any CG?
A little bit of CG to enhance the practicals, which were done by Jerami Cruise and Anthony Julio from ToeTag FX, they’re the people who did the August Underground movies. It would take long set-up times to do certain effects because sometimes it’s an eight-hour make-up, so I had to storyboard everything out and show Jerami where I was going to be placing the camera and then we would work out shot for shot what the effect would be. How were your leads (Ciara Hanna, Emily O’Brien, and Jackie Moore) about dealing with all the blood?
They were good sports about it; there was a lot of blood used. But, you know, I don’t make my actors, especially when it comes to blood, go through stuff I wouldn’t put myself through, so I got sprayed with the blood as well just to show them that it was OK and that it would wash out.

Yeah, the scene in which Julia (Emily O’Brien) gets sprayed with blood and she just kinda basks in its glory was shocking and awesome.
Yeah, that was one of my favorite moments in the film. That whole torture sequence was one of the most fun things to shoot for that movie. How was it to flip the table with the three guys and the three girls potentially being roofied and victims and then all of sudden they get the upperhand?
It was fun. I think part of horror is taking what’s familiar and then turning it on its head. You want people to be in a familiar scene and feel like, “Oh yeah, I know what this is,” and then you flip it so that they’re like, “wait, I have no clue what this is.” Because then they have a feeling of like “what can happen next?” and that’s where horror comes from, the unknown. It’s taking something we know and making it unknown.

I think a lot of people might point to The Grudge as source material; was there any influence from that movie or does it have more to do with Asian superstition in general?
That’s interesting because I basically wanted to make a movie that was Asian ghost cinema merged with American torture-porn stuff like Hostel. So it’s like taking that and merging it with Ju-On or The Ring, so I definitely don’t take that as an insult, but I’d say that we accomplished what we wanted to do. Not to spoil the movie, but things are left open for a sequel; are things in the works for a sequel? How far do you want to take things if this turns into a franchise? And would you veer toward the slasher genre?
I guarantee that there will be a sequel if the movie does well (laughs). So, if everybody buys it and talks about it and likes it, then, yeah, there’ll definitely be a sequel. We left it open for that. Having said that, yeah, I think we would probably go the slasher route on the next one, which would be a lot of fun.