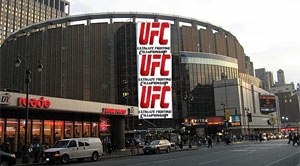 UFC today announced a series of important steps to bring mixed martial arts (MMA) events to New York. These efforts include the scheduling of the organization’s first, professional MMA event in New York since the state’s ban in 1997. This event will take place at Madison Square Garden on April 23, 2016 featuring UFC’s top champions competing with other world-class athletes inside the Octagon. UFC is also taking additional steps through the federal courts to ensure the event’s success.

We believe fight fans have waited long enough to experience live UFC events in the state of New York and we are thrilled to announce our first event at Madison Square Garden,” UFC Senior Executive Vice President and Chief Operating Officer Lawrence Epstein said. “Professional MMA is legal around of the world and it is about time New York followed suit.

In August, UFC filed an appeal in the United States Court of Appeals for the Second Circuit – the federal appellate court with jurisdiction over New York – stating that New York’s prohibition of regulated professional MMA events violates the First Amendment rights of athletes and fans throughout the state.

On September 28, UFC filed a new case in federal court, reiterating its claim that the New York law banning MMA events is unconstitutional. This out-of-date law is too unclear for the public to understand, and has allowed regulators in New York to pick and choose arbitrarily what events they will permit. Events featuring every combat sport except MMA seem to be allowed in New York, though this is not explicitly stated in the law. The statute, and the state’s pattern of enforcing it, violates the Constitution’s prohibition on unconstitutionally vague laws.

Later this week, UFC will ask a federal judge to issue a preliminary injunction against New York state officials enforcing its unconstitutional law. Without such an injunction, the event at Madison Square Garden will not be able to proceed.