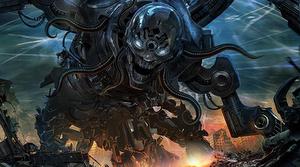 Legendary Canadian thrash metal masters, Annihilator, have unveiling their 15th studio album, Suicide Society. Do yourself a favor and head over to GuitarWorld.com for a full album stream. Once again, guitar wizard Jeff Waters handles all songwriting duties, plays all guitar and bass, engineers, produces, mixes, and masters… and Waters is also back commanding lead vocal duties, as he did on the critically acclaimed King of the Kill (1994), Refresh the Demon (1996), Remains (1997), and other Annihilator albums through the years.

Aside from the band’s upcoming scheduled devastation at some of Europe’s mega-summer festivals (such as Wacken Open Air), Annihilator will be headlining Europe this fall, and talks are underway to bring the band to South America, Japan, and likely North America in 2016.