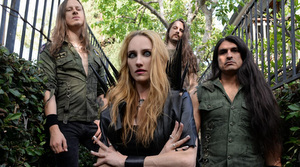 In one week, on September 25th, Huntress will release their third studio effort, Static. If you haven’t heard them, Huntress is the heavy metal outfit with a classic metal sound and a pagan slant, and they rip!

A few days ago, Huntress released a full album teaser that features some of the awesome riffs, sweeping vocals, and the full range of what one can expect. Check it out in the player above. First impressions of Static for us is that this is a different album than the works; in general, the tempo has been slowed, and a softer sound has been exposed. It still sounds killer! And, of course, there are a few tracks that toe the line of what Huntress has given us in the past.

Static is available for pre-order through Napalm Records here.