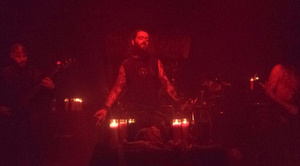 A devastating new hymn from NYC black metal coven, Teloch Vovin, and their Further Down the Tunnel EP, has been released through an exclusive premiere at Cvlt Nation as the record nears release on the Fall Equinox.

‘When the Torrential wave of Hell Slams, Hammering thru the Absurdity. Down thru the Flesh, Down thru the Spirit. Vena Cava–OverFlowing Life’s Ink’… These Lines speak volumes about the Inspiration behind the song. The Flesh as a Prison for the Spirit, the Absurdity of Life itself and the Anxiety, Depression, Rage and Hopelessness Experienced thru this Absurdity. It also relates to the Death Worship behind the Band. The Desire for Death’s Embrace and the Negation of Being.

Teloch Vovin will independently issue Further Down the Tunnel digitally and on CD on the first day of fall, September 23rd. Pre-orders for the CD and other merch including patches, prior releases, ceremonial candles and more are available here and digital pre-orders available here.

Following an absence of shows since last year, Teloch Vovin will also return to the stage in support of their new works. Already confirmed is an appearance at the first day of the Rage of Armageddon Fest at Saint Vitus Bar in Brooklyn, alongside Broken Hope, Embalmer, and more, with additional live rituals to be announced.