[PIC] Ash Is Back In His “Groovy” Old Car 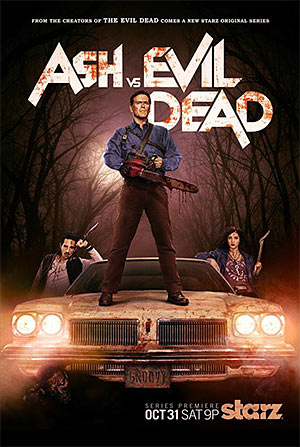 Besides his kickass chainsaw-wielding arm, you will spot another very familiar object in the new poster reveal for Ash vs Evil Dead on STARZ. It’s Ash (Bruce Campbell) standing on the hood of his classic 1973 Oldsmobile Delta 88 Holiday Sedan. The car first appeared in Sam Raimi’s 1981 cult horror hit, The Evil Dead. It’s nice to see that Ash hasn’t really moved on from the past. Fortunately, he’s got his Deadite-slaying sidekicks to help him out in his new journey into hell.

Ash vs Evil Dead is set to premiere on STARZ on Halloween night at 9:00pm EST. Raimi directed the first episode that he wrote with Ivan Raimi (Darkman, Army of Darkness, Drag Me to Hell), and Tom Spezialy (Reaper, Desperate Housewives).