Forced Order Stream Vanished Crusade In Its Entirety – And Its Brutal! 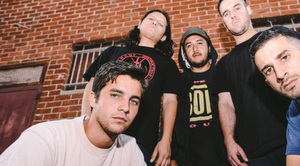 Vanished Crusade, the debut full-length album from Forced Order, is now playing in its torrential entirety through an early stream at Decibel Magazine, a week-and-a-half ahead of its street date. Head on over to decibelmagazine.com to have your ears pummeled.

Revelation Records will issue Vanished Crusade on CD and digital platforms on August 7th, with the vinyl version to follow in the fall. Pre-orders for all physical formats — with 500 copies of the LP on Coke Bottle Clear and 1,200 on Clear Gold — including merch bundles, are now available through RevHQ.

Having just taken part in This Is Hardcore in Philadelphia, on August 1st, Forced Order will cross back to the East Coast with shows in Arizona, Oklahoma, and Virginia between August 1st and 5th on their way to the start of The Life & Death Tour. Featuring headliners Bane and Turnstile, Forced Order will join Backtrack, Mizery, and Heavy Chains for the entire 26-city tour of North America, with regional sets from Power Trip, Death Threat, Bitter End, and Crown of Thornz on select dates. The tour starts in Rochester, New York, on August 6th and ends in Amityville, New York, on August 31st.