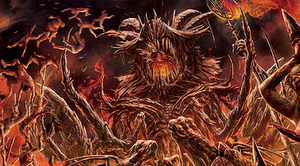 The Black Dahlia Murder have released a new track, “Receipt,” and it’s streaming right now over at Revolvermag.com. The track comes to us from the band’s new full-length album, Abysmal, which comes out on September 18th, on Metal Blade Records. Head on over to Revolver and let us know what you think of the new track.

The song ‘Receipt’ is a very personal and emotional one for me. I wrote the lyrics in my darkest hour, when anxiety had bested me and self-loathing had come to an ultimate head. I was alone. I felt like I couldn’t create anything, and I was about to lose all that in life that I hold dear to me to failure. The song was a cathartic release and I hope it can be some kind of help to someone out there who feels the same darkness. I truly love the song and I feel like its one of the best this band has ever written, and I thank you all for listening.

The Black Dahlia Murder will return to North America this fall to headline the IndieMerch Tour with Iron Reagan, Harm’s Way, and Maruta. The trek will start on October 3rd, and run through October 30th, and it marks the group’s first official Canadian/U.S. tour supporting their highly anticipated new album. Be sure to either see below for all tour dates.