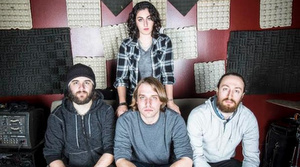 Earlier this month, we brought you the cover art and the official release date of Chicago’s blackened death grind outfit Immortal Bird‘s debut full-length, Empress/Abscess. While we’re still roughly two weeks away from the July 14th release date, you can head on over to Decibel Magazine right now to get the first dose of the album in the form of the new track, “Neoplastic.”

‘Neoplastic’ was one of the first songs we wrote after the Akrasia EP was finished, and it went through several different live incarnations before we arrived at the version we recorded. I never envisioned having a guest vocalist when we were writing the album, but John has such an aggressive, inimitable voice and killer presence that I just had to ask! I think it adds something very cool to the track and I’m stoked he was a part of it.