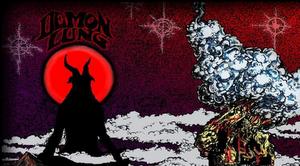 Las Vegas-based doom metal outfit, Demon Lung, are streaming their new single, “Mark of Jubilee,” over at Decibel. The track is smooth and heavy, and it’s definitely doom metal, but there’s a soulfulness to the tone, especially during the brief mid-song interlude. It’s safe to say that we can probably accredit much of the track’s heartfelt delivery to vocalist Shanda Fredrick, but she’s definitely not alone in making the dark side of heavy metal so appealing.

“Mark of Jubilee” comes forth from the band’s upcoming album, A Dracula, which is scheduled to blanket the Earth in blackness on June 16, 2015, via Candlelight Records. The album, captured by Billy Anderson (Neurosis, Zoroaster, Eyehategod, Taurus, Brothers Of The Sonic Cloth, etc.), is an eight-track concept album based loosely on Juan López Moctezuma’s 1977 horror film, Alucardain, in which two teenage orphan girls living in a Catholic convent unleash a demonic force and ultimately become possessed by Satan.

Alucarda is a more relatable story for me than our last album’s [The Hundredth Name] subject matter, which made writing a lot more fun this time around. The heroine in this story is the daughter of Satan, who happens to fall in love with the purest of souls in the convent she resides. She coaxes this soul over to the dark, with only intentions of love, but in doing so she dooms her to death by the hands of the nuns. The anger consumes her and she uses her dark powers to resurrect her love and together they kill the convent and then the world.