Be A Part Of Ensiferum History In Philly! 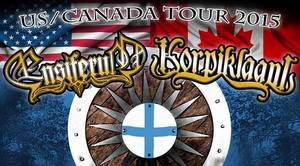 If you’re an Ensiferum fan and plan on being in Philadelphia on May 28th, then you might want to go check them out, especially if you want to possibly be documented as a part of the folk/death metal band’s history. What’s going on you ask! Well, Ensiferum is shooting the video for the track “Warrior Without a War” at the Theatre of Living Arts.

Get yourself to Philadelphia on the 28th of May, put your war paint on, warm up your vocal chords, and get ready to go berserk!

Fans that want to be a part of this occasion can buy tickets now at livenation.com.