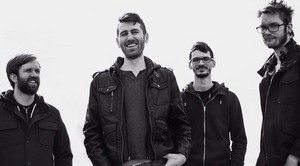 Icarus the Owl is probably one of the most talented bands you probably never heard of. They play a style of music that is considered by many to be progressive pop punk, bringing insanely catchy melodies with their vocals while blending the intricate musicianship of math rock groups. They pull off their act without any hesitation live, instead reaching for more and more space to shine and dazzle a crowd. I had the chance to interview Joey Rubenstein, the man behind the majority of the writing.

Hello Icarus the Owl, how are we doing today?
Doing well! Thank you!

It is really early in the morning, like 4:23 a.m. currently, any advice on what to do when you guys have trouble sleeping on the road?
I will usually listen to pretty music on my iPod. Bon Iver usually does the trick. Sometimes the other dudes are snoring, so headphones are pretty necessary when sleeping around stinky snoring dudes.

Speaking of the road, how has your tour been going?
The tour has been fantastic. We did four separate legs for it. One with A Lot Like Birds, one by ourselves, one with The Venetia Fair, and one with The Ongoing Concept. All of them have been really fun.

Thinking back to last year and releasing your self-titled album, how did the writing process come about for such a technical and spastic 13 songs?
It usually starts with me writing the song on either Guitar Pro or via my voice memos on my iPhone that I will then transpose to Guitar Pro. From there, I send the Guitar Pro files to the other guys in the band and they take the songs I have written and make them better. Then we discuss and make any changes that need to happen to the song and we either scrap it or use it. After that process, which can take up to a year, I will write melodies and lyrics to them. Sometimes it starts with a melody or a lyric that allows me to create the song in the first place.

How has the new guitarist adapted to your songs and being with you guys 24/7?
We got really lucky with getting Tim on board. He can sing harmonies and play all the parts really well. He is really easy to get along with, which is super important when we are touring. I can’t say enough nice things about him.

What do you guys tend to eat when on tour, does anyone try to keep a healthy diet or is it binges and cravings most of the time?
It depends on the person I suppose. It is rare when we eat fast food. Most of the time it is Peanut Butter and Jelly sandwiches that get us by from place to place. I personally am vegan so that is the diet I stick to on the road and not on the road. It makes it so I have to shop at grocery stores most of the time. We all end up buying grocery store food. I see the guys always eating Cheez-Its. Sometimes there are a healthy amount of sour gummy worms present.

What are your favorite toppings to put on pizza?
Olives, pineapple, green peppers, children’s tears, and spinach.

Any last words?
Thank you for reading this!

Find Icarus the Owl on Facebook and at icarustheowl.com