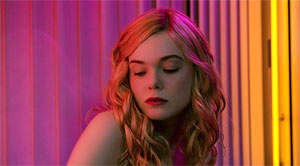 Nicolas Winding Refn is going to tackle three themes in his upcoming film, The Neon Demon: beauty, obsession, and evil. These aren’t entirely new themes for Refn, as they’ve always been present in some form or another in his previous films, but he will be much more direct with how he treats them in The Neon Demon. From what we know, it’s a female-centric horror film that Refn has been itching to shoot in Los Angeles since the completion of Drive. In fact, principal photography is nearly complete, and Refn has decided to tease his little horror masterpiece with the reveal of two new photos.

Once filming is entirely complete, we’ll make sure to drop another update here on Yell! Magazine.

About The Neon Demon:
When aspiring model Jesse moves to Los Angeles, her youth and vitality are devoured by a group of beauty-obsessed women who will take any means necessary to get what she has.