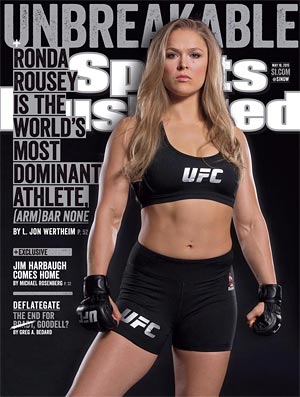 UFC women’s bantamweight champion Ronda Rousey has officially made the cover of Sports Illustrated (May 18th Issue). Celebrations within the promotion are kicking into high gear right now because Rousey is the first fighter in the history of the UFC to grace the cover. Besides being the cover model, Rousey is also the main story topic in the magazine as SI named her “the world’s most dominant athlete.” To understand why, you can now read SI’s explanation and story warm-up here.

In addition to this news, Rousey has a part in the upcoming Entourage movie slated for release on June 3rd and will also appear alongside Roddy Piper in a horror comedy short titled Portal to Hell!!!

Back inside the UFC cage, Rousey is scheduled to defend her bantamweight title against Brazil’s Bethe Correia at UFC 190 on August 1st.