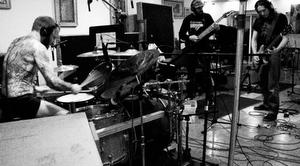 Hardcore doesn’t get much more intense than Philly’s Die Choking. OK, their brand of hardcore has death metal leanings, but it’s still firmly on the punk side of the spectrum. Earlier this week, Die Choking announced the completion of their debut full-length album, III, which will be released later this year. The 11-track effort promises elevate the precedent set forth by the band’s previous two EPs by introducing an even faster BPM rate, more complicated arrangements, and more elements of hardcore punk and crust merging with the band’s blinding speed/grind metal. Additional details on III will be announced in the weeks ahead.

As part of the news about III, Die Choking also released a teaser video from the recording sessions. Check it out in the player above.

Starting tonight, Die Choking has tour dates throughout the Upper Central and Northeastern U.S. in the coming months, including Midwest shows surrounding their performance at No Tomorrow Fest in Appleton, Wisconsin, joining MDC, Channel 3, Hemdale, Sick/Tired, Tenement, Cloud Rat, and more. Several new shows in NY, Philly, and across New England with the likes of Fantasy Panther, Drones For Queens, Connoisseur, Ratstab, and more have been confirmed for May and June. Additional spring and summer tour dates as well as the band’s first West Coast Tour for October will be announced shortly.