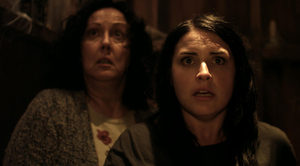 A good horror-comedy movie is hard to come by, so it’s understandable that Hollywood would jump all over such a movie from foreign lands to domesticate it. It’s sad, but it’s comprehensible. The latest horror-comedy slated to receive such Hollywood treatment is the New Zealand movie Housebound, which we screened and reviewed at 2014’s Fantasia.

We thought Housebound was amazing! And since it’s screening at the fest, it’s received a Canadian distribution deal. But that won’t be the case in the U.S., according to The Hollywood Reporter, which says that New Line has attained the rights to do a remake. As well, Gerard Johnstone, Housebound‘s original writer/director won’t be leading this project, but he will be attached as a producer.

Kylie Bucknell is forced to return to the house she grew up in when the court places her on home detention. Her punishment is made all the more unbearable by the fact she has to live there with her mother, Miriam – a well-intentioned blabbermouth who’s convinced that the house is haunted. Kylie dismisses Miriam’s superstitions as nothing more than a distraction from a life occupied by boiled vegetables and small-town gossip. However, when Kylie also becomes privy to unsettling whispers and strange bumps in the night, she begins to wonder whether she’s inherited her mother’s overactive imagination, or if the house is, in fact, possessed by a hostile spirit who’s less than happy about the new living arrangement.

What do you think of Hollywood remaking Housebound? Necessary?