Dreadlords Are Gonna Skin You Alive On “Dreadlords Cometh” [VIDEO] 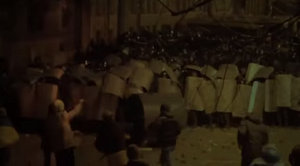 Like a blast of indie noise, such as Sonic Youth (but nothing like it), combined with elements of black metal and the occult, the Dreadlords are seemingly creating their own heavy metal genre. The weird thing for any vanilla fetishist is that upon hearing the underpinning sexual pulse of “Dreadlords Cometh” you might feel the need to bathe in blood, feel its power, light some candles, burn some incense, and pray to the goddess. Nah, not really, we’ll leave that to the true pagans and/or serial killers.

But as a band proclaiming to have roots in the Blues, there is definitely a sexual pulse to this new track, which marvels in its stripped-down simplicity. And that’s the genius of Dreadlord, doing away with pretentious heavy metal tropes and getting back to the fundamental basics. “Dreadlords Cometh” is from the Dreadlords’ debut LP, Death Angel.

The video for “Dreadlords Cometh” was directed by James P. Gannon, and displays quick cuts of the band performing their craft among other snippets of brutal uprising footage and an ominous story line, of which the cult collectively offers:

The video is about Dreadlords being released to the population, which causes riots throughout the globe due to our occult practices and music. We are being released by a secretive occult group to cause chaos, through/by our music.

Death Angel was released in December via Not Just Religious Music, on LP limited to 500 copies, with 200 on black and 300 on random colors, each including a download code and digital formats. Place orders and stream the album in its entirety here.

The album features Brian Zimmerman on banjo; Samantha Viola on drums, bells and ritual implements; and J. Gannon on vocals, with guest vocals on the title track by Susan Bones.