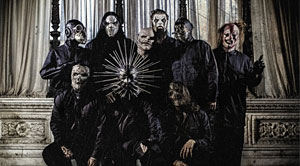 Well, well, well. The masked metallers from Des Moines, Iowa are coming back to Montreal this year. Slipknot is officially booked to headline a night at Heavy Montreal, formerly known as Heavy MTL, in August this summer. Don’t believe us? Then just hit up the festivals website for the freagin confirmation, and trust us, you won’t miss the announcement because it’s plastered over the bloody homepage.

To bring you up to speed on the top charting band, Slipknot is currently on tour for their fifth major label studio album, .5: The Gray Chapter, which launched in October 2014. So expect most of the set list to revolve around that album throughout the night. Songs such as “Custer” and “The Negative One” are bound to be crowd pleasers this year in Montreal. Expect classics such as “Duality”, “Surfacing”, and “Wait and Bleed” to be played at one point at Heavy Montreal too.

There’s no word on which day Slipknot will perform since the lineup isn’t set in stone yet. But our best bet they will hit the stage on Saturday night because Saturday’s are regularly slotted for the cream of the crop. Doesn’t Metallica ring a bell?

We’ll make sure to keep Yellers in the loop when the exact day is announced, so stay tuned on Yell! Magazine. We rule the world!