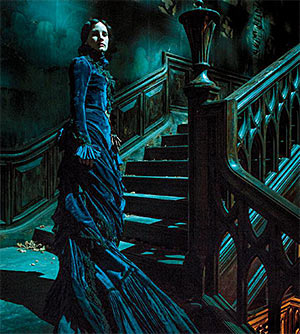 Set entirely in the 19th century in the northern region of England, Crimson Peak tells the tale of a young author named Edith Cushing (Wasikowska), who discovers the mysterious past of her charming new husband and hero, Sir Thomas Sharpe (Hiddleston), in a haunted mansion in Cumbria.

Above is a first look at Jessica Chastain as Lady Lucille Sharpe, standing on a staircase inside a crumbling mansion. The film is currently slated for release by Universal Pictures on October 16, 2015.

In the aftermath of a family tragedy, an aspiring author is torn between love for her childhood friend and the temptation of a mysterious outsider. Trying to escape the ghosts of her past, she is swept away to a house that breathes, bleeds…and remembers.