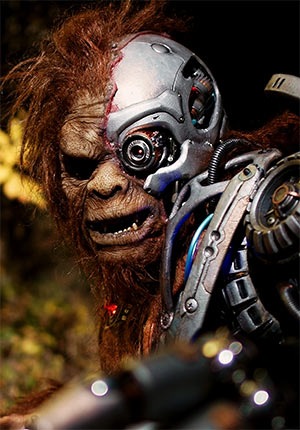 Did you forget about Megafoot? Does a Sasquatch killer monster enhanced with a bionic arm ring a bell? I’m sure it does if you crossed paths with the movie’s teaser poster in the past. If not, oh well, because today we have new evidence that the cybernetic creature is alive!

Thanks to Ship To Shore Media and studio Epic Pictures, we have a first real look at Megafoot below. Not as beautiful as you imagined, right? In my opinion, Megafoot looks like leftover scraps from a T-800 assembly line. Perhaps, a 400-year-old cybernetic Ahhnold? All I know is that this thing looks mean as hell, and I wouldn’t want to come across one anytime soon.

There’s no official word on when the feature film will be completed, however, we can tell you that the filmmakers are doing everything they can to complete Megafoot at the highest quality standard possible. Megafoot is a top-secret killing monstrosity (half Machine, half Bigfoot, all Terror!), which has recently escaped from the highly covert laboratory where it was created. An elite squad of soldiers has been sent to track and destroy the sadistic Sasquatch before it wreaks its horrific vengeance on the human race. Expect action, suspense, creative kills, and gore-soaked thrills in a movie that’s bigger than big… it’s Megafoot!