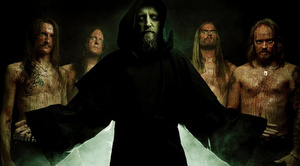 Sweden’s death metal horror hounds, Bloodbath, have just announced that Paradise Lost’s Nick Holmes will take over vocals duties. After months of speculation and rumor, it’s now very evident that Opeth’s Mikael Åkerfeldt has vacated his position within the supergroup’s ranks (which includes members of Opeth and Katatonia) just a couple months before the November 18th release of Grand Morbid Funeral. But hope is not lost.

Blakkheim (guitar) commented on the transition:

Little did I expect to be working with the voice behind the death metal classic Lost Paradise, or the genre-defining Gothic, and yet here we are decades later fulfilling another death metal dream. With his sinister and ominous vocal delivery, it’s an absolute pleasure to make Old Nick the bell-ringer in Bloodbath’s Grand Morbid Funeral!

Ever since I got into Lost Paradise back in ’90, Nick Holmes has been one of my favorite growling vocalists out there. He was always audible and articulate but still deep and definitely morbid. It is a great pleasure to work with him some 25 years later after I was introduced to his thunderous roar!