[PIC] The Devil’s Advocate TV Series In The Works 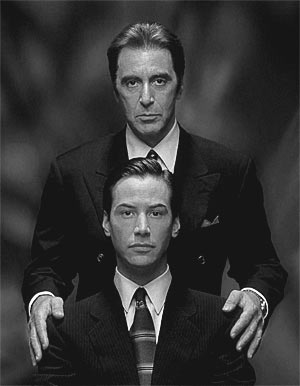 In the very near future be prepared to add another potential TV series to your list of series to watch because NBC has plans to develop The Devil’s Advocate for their network, without Al Pacino and Keanu Reeves of course.

Apparently, NBC already ordered a pilot episode, which is expected to be penned by Matt Venne (The Exorcism Of Molly Harley, Bag of Bones), who is also co-producing alongside John Wells, Andrew Stearn, and original movie producer Arnold Kopelson.

There’s no further details yet, however, we have included the plot of the demonized drama that unfolded in the 1997 movie, just to refresh your memory.

Are you looking forward to this?

About The Devil’s Advocate

Devil’s Advocate thematically raises the preposition that ‘is winning everything’ in the legal profession.Does a lawyer commits the basic sin of Vanity if he believes his job is to win, as Kevin does. Further the movie in John Milton’s trenchant speech questions the very notion of righteousness in the post-modern world. Milton’s speech rips apart the whole discourse of religion when he presents the inherent contradiction of it. Kevin’s dilemma reflects the modern man who accuses the circumstances for being what he is,the culture dominated by making money ‘which build egos of the size of cathedral’, the question is can one really call what one does ‘freely-willed’?. The movie deals with these ‘Hamltian questions’ in a lawyer’s mind.