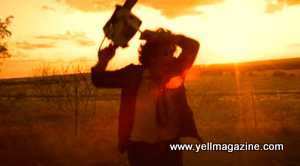 Although we screened the classic, genre-defining The Texas Chain Saw Massacre at Fantasia 2014, reviewing it would be a task in “been there, done that.” However, I will say that it is impressive that a 40-year-old movie can still make someone get up to leave the theater so that she can vomit. Also, I was surprised, by myself and others, that despite having seen the movie multiple times that it can still make you jump out of your seat. All of which to say that this is one supremely masterful movie.

The screening was all about the 4K presentation and about honoring Tobe Hooper with the Fantasia Lifetime Achievement award. I think all in all, Hooper received a total of three standing ovations from the audience.

So, first, the 4K looked great, offering a resolution of the film that’s never been seen before. I thought it looked grainy still, but I understand that it’s good grain and not the result of bad filming. Also, the 7.1 surround was amazing, putting you in the action on an auditory level never before experienced… buzz, buzz.

After a small retrospective film showcasing his work, Tobe Hooper was presented with his little Fantasia statuette, and said a few words, mostly indicating that “we’d talk” after the film. Which we did. The evenings MC sat down with Hooper for a Q&A session and afterward the audience was able to field some questions.

Most of the conversation revolved around the trivia and making of the film, and the level of detail that Hooper is able to recall is amazing. A couple of the highlights include the fact that Hooper is still unsure if Pam’s hand was really cut with a real knife for the shot in the van, and his shopping story about where the inspiration for the film came from.

I don’t know if the 4K will be apparent when you view it at home, so if you ever get the chance to screen The Texas Chain Saw Massacre in 4K at a theater, I highly recommend that you do.