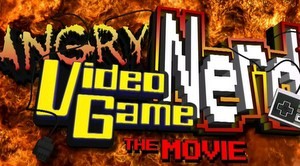 Angry Video Game Nerd: The Movie will make its International Premiere at Fantasia 2014, on July 27th, after making its World Premiere on Monday, July 21st, at a sold-out special event screening in Los Angeles.

I have a feeling that if you enjoyed, were amazed by, or at least chuckled about the failed E.T.: The Extra Terrestrial games that were buried in a New Mexico landfill and recovered last May (and subsequently went up for auction), you’re going to find something oddly familiar about Angry Video Game Nerd: The Movie. For me, anyway, the real life E.T.: The Extra Terrestrial story came to mind when I saw the trailer.

I also have a feeling that whether you’re a gaming nerd or just someone obsessed with fetish property you’re absolutely going to love this movie.

Based on the hit web series of the same name, Angry Video Game Nerd: The Movie blends science fiction, adventure, and comedy to follow a disgruntled gamer who must overcome his fear of the worst video game of all time in order to save his fans. Hilarity ensues as a simple road trip becomes an extravagant pursuit of the unexpected.

It was in 2006 that Rolfe uploaded his first review clip, establishing the popular persona that has made him a digital-age star. His motor-mouthed alter ego became a web sensation and the lure of the big screen came calling. Rolfe, his co-writer/director Kevin Finn, and producer Sean Keegan, have met the challenge with this inventive and off-kilter homage to B-grade cinema.

Entirely crowd-funded by the webseries’ large international fan-base, Angry Video Game Nerd: The Movie raised what was, at the time in 2012, the second most ever for a film campaign online. The film also tapped into its fans in the Industry, with more than 80 VFX artist volunteers contributing to the film and a score by AVGN fan and Emmy-Award winning composer, Bear McCreary (The Walking Dead, Battlestar Galactica)

The film retains all the elements that made Rolfe’s web series so successful — his delirious tirades and corrosive commentaries, along with a streak of humor comparable to Lloyd Kaufman’s. The film holds equal appeal for neophytes as a road movie that Rolfe carries capably with his Buster Keaton-esque comic turns. And yes, rest assured, Rolfe’s crafty critiques make their way into this love letter to genre classics!

Angry Video Game Nerd: The Movie will be released on VOD September 2nd, and on DVD/BluRay in November.