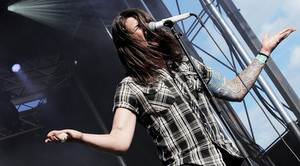 Referencing the recording process of your last album, does anyone now have a fear of mice or of Crispen Glover?
Oh, well, mice? No. I think everyone in general just aren’t into that so much ’cause when we were writing we were in this house in West Virginia, it was on top of this mountain. It was actually beautiful. It was a very old house, it had been there since the colonial period and they had kinda fixed it up, but we’d wake up and there’d be mice on the blankets and you had to toss them off.

The funny thing about Crispen Glover is that John, our guitar player, not so long ago there was this thing about if there was going to be a movie about the band who would play who, and Crispen Glover would play our guitar player, John Nolan, because they’re just very much alike, like there’s this “Get your damn hands off her” thing that we have him do and the likeness is really uncanny.

[I have to say that Adam’s impersonation of Crispen Glover’s Back to the Future line is very damn impressive.]

Interesting. I wasn’t aware of that, I was just referencing the Willard movie in which Crispen Glover leads the rats…
Oh, oh, oh, that. No, see, I didn’t even pick up that that’s what you meant because I had two things on the backup ready. Man, I saw the movie right when it came out, but I haven’t seen it since.

I hear Glover is hard to work with though…
I hear he’s strange. Like he mows his yard in a suit and things like that, but I just read that on the Internet, so who knows?

So, Rockfest is a pretty heavy festival for Taking Back Sunday. Do you have thoughts on that? Like, right before you on your stage there’s Cannibal Corpse.
Yeah, when I saw that lineup I was like, “What the hell are they thinking?” The first time we were in the UK we played the Download festival, and right before us was supposed to be Slayer. It’s our first time ever going there, and they just happened to have the earlier slot because of whatever their scheduling was. So half of their crew got stuck at customs because they were coming from mainland Europe. So we’re basically told [by the festival] “hey, we need you guys to go on now because the Slayer guys are stuck at customs and they’re gonna be late. So they start to roll our gear on stage, so if you can imagine a tent of 5 or 7 thousand angry Slayer fans, and then there’s our band coming up like, [high-pitch girlie-man voice] “Hey, guys, do-dee-do-dee-doot.” We couldn’t be more different.

Needless to say, there was a point where two of our guys just hid, ’cause it’s like, “I’m not going on that stage, they’re throwing bottles, they’re throwing all this stuff.” And then right in the nick of time, you couldn’t have written it better, the rest of their crew shows up and they get all their stuff on stage, and Slayer goes on. And then we go on stage afterwards and there are like 27 people there. So the whole tent leaves and we’re relieved that there are no bottles full of pee being thrown.

Hopefully today won’t be the same type of thing. It’s a very interesting contrast. I love the art and the things I like is that there’s this juxtaposition between innocence and just really dark, so I think it’s very interesting with this lineup that it’s like Cannibal Corpse and then Taking Back Sunday. But I think it’ll be a good time; I’ve gotten to see a few of bands playing and the crowd seems really cool.

What’s the worst injury you’ve sustained as a musician in your career?
Oh, I actually have a long list. The first really bad one was I dislocated my hip; I just kinda went head first off of the stage. And I also got about 120 stitches in my eyebrow and forehead. That’s the worst one. The doctor said, “You’re lucky you kept your eyebrow.”

You’re wearing a full sleeve, do you have a favorite tattoo?
I don’t think I have a particular favorite, just because each one tells a kind of different story. But I did take the time to go this guy, Tommy Helm, he’s done a whole lot of work on our drummer too, and it was kinda the first time I went below the elbow, they call it the “job stopper,” and I just got this giant thing. It’s just like an anchor and helm for my grandfather. I would say that’s probably my favorite one, just ’cause it’s the most detailed and he’s the patriarch of our family.

What item do you always bring with you on tour?
Toothbrush (laughs). No, I would just say my notebook, man. That thing goes everywhere with me. After I saw The Basketball Diaries, ’cause it came out when I was in high school, I was the kid who saw that and just started carrying a notebook in my pocket. Ever since then, that thing goes everywhere with me.

For lyrics and stuff?
Yeah, and for just general ideas, little stories. Like 90% of it is just awful, but every now and again there’s a diamond in the rough.