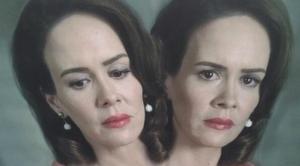 October is inching closer and closer, but first the promo machine for American Horror Story: Freak Show has to hit top speed. Helping to lube the gears is show star Sarah Paulson, who revealed via Twitter some freaky details about her character on the upcoming Season 4:

So excited to be playing Bette AND Dot this season. Two heads are better than one! #AHSFREAKSHOW

I’m thinking this song needs to be the show’s closing credit theme:

American Horror Story: Freak Show will be set in Jupiter, Florida, and centered around one of the few remaining freak shows of the 1950s as its members do anything to keep the business alive. The season will focus on the conflict between the freaks and the “evil forces” who do not understand them. The season will also feature a “clown killer” and a “bearded lady.”

Will you be watching the upcoming season of American Horror Story?