Ghostlight (2014): Will It Haunt You For The Right Reasons? 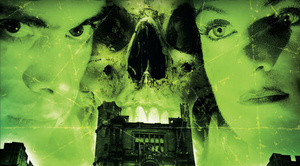 Brain Damage Films isn’t exactly known for putting out top-shelf, Oscar-worthy films, but does anyone involved in genre films really aim for mainstream accolades? And besides, those of us who eat, breathe, and bleed genre films can find something to appreciate in just about anything.

OK, enough with the defending of Brain Damage. Among their latest crop of bad movies is Ghostlight from director Jeff Ferrell. It’s his full-length debut, and to make it happen he also donned the writer, producer, editor, and actor hats. But Ghostlight isn’t Ferrell’s introduction to film or horror; back in 2012 his short film, Morella, garnered much praise during its extensive festival run.

According to Brain Damage, Ghostlight features some Hitchcockian elements in what is essentially a retelling of the classic “I dare you to blankity-blank-blank” story. You can read the full synopsis below to get a better idea of what the movie is about, and then you can watch the trailer above to see how it plays on the screen.

The Ghostlight DVD is now available for to rent or purchase, and it’ll be coming to all major VOD platforms this July.

Andrew (Brian Sutherland) wins a radio contest to spend one night alone in a haunted theater on the 80th anniversary of the bloody murder/suicide that occurred within its walls. His prize: $50,000. His task: To spend 12 hours alone inside. The catch: The theater has been reportedly haunted ever since the tragedy 80 years ago, and has been plagued by a series of mysterious deaths in the years since.

A devout disbeliever in the supernatural, Andrew has no qualms about spending the night there. But his wife Mira (Lisa Coronado), who has been haunted by psychic premonitions about the place, feels differently. As Andrew is locked inside the theater for the night, the ghosts and secrets of its past begin to reveal themselves to him. Will he make it through the night to collect his prize? And will he get out before the murderous ghosts take hold of him forever?