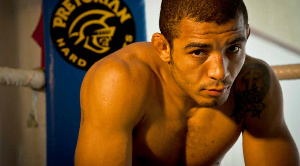 Last Wednesday, the UFC officially announced that Conor McGregor will return to the Octagon to face Cole Miller on July 19, 2014, at UFC Fight Night 46. Shortly after the announcement was made, McGregor also stepped back into the spotlight to stir things up in the featherweight division and to rip into the Brazilian champion.

In a video we posted earlier, McGregor said that he will “annihilate” UFC Featherweight Champion José Aldo, and many more things. Now, Aldo has had the chance to fire back at the featherweight prospect via MMA Fighting:

That’s normal, some fighters like to promote themselves by talking, and he’s just another one. I’m open to new challenges and I really hope he gets where he’s saying he will, so we can fight and see for sure everything he says. For now, he’s only a talker.

I never watched this guy fight, man, he only fought once and thinks he’s the king. I’m waiting to see him fight again.

Clearly, Aldo doesn’t feel threatened by McGregor because it doesn’t even sound like he is paying much attention to his fights. McGregor had two fights since his debut in the UFC and faces his third opponent in July.