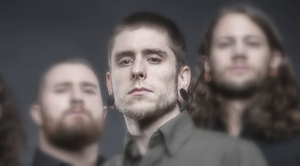 Speaking of emotion, “Diggs Road” is a personal song for you, can you explain why you chose now to put that on a record?
I’ve never written a sad, meaningful song like that, and we’re not expected to write something like that. It was nice to be able to branch out and not have to worry about trying to write the most gruesome, brutal thing possible, it’s actually heartfelt, sad, and depressing. It’s not the typical “kill, kill, kill” stuff, and it was something that I always wanted to do, to write a personal, heartfelt song.

Are there any surprises for the fans on your current tour?
We haven’t been on the road in awhile, and we don’t really have anything planned. We’re just ready to bring the intensity that we’re used to bringing at our live shows.

How many tracks from the new album are on the set list?
None at the moment. I don’t know if we’re going to be playing any new songs on this run yet, but definitely for our summer tour with DevilDriver.

Is there anybody on your wish list that you’d like to tour with?
The Deftones, but that would be an odd tour for us, but at the same time I’d love to, just to be able to do it. Obviously a huge act like Metallica or something, it would be amazing to tour with them.

Do you prefer a festival run or a headlining tour?
Either or, but I do really like outside festival shows, like Mayhem and stuff.

When did you discover your singing voice and what were you listening to that inspired you to give the vocal style a try?
I’d say around 17 years old or so. I just wanted to try out doing vocals and stuff and I did backup vocals for my first band and after that band broke up I decided I wanted to be a vocalist instead of a guitar player.

Do you have any concerns about damaging your vocal chords? Have you taken lessons for the style?
I think it’ll eventually catch up to you; it’s not something that you’re supposed to be doing anyway. I think it’s going to wear itself out as I get older. I’ve never really taken any lessons or anything like that, I just kind of winged it and did it myself.

Does Whitechapel have any plans to film a DVD concert?
Yeah, we’re actually crowdfunding a DVD. We don’t know exactly everything we’re going to do yet, but I’m pretty sure live performances will be on there.

It’s been a tough couple of years for heavy music (with Mitch Lucker’s death, Randy Blythe’s trial in Czech Republic, Tim Lambesis’ case, and most recently the death of Oderus Urungus), if at all how have these events affected you or Whitechapel as a whole?
It’s just one of those shocking moments. The people that you’ve met, the people that you’ve seen, you hear that they’ve passed away or something crazy like the Tim Lambesis thing happen, unexpected stuff like that, it’s one of those things that hits you, but at the end of the day it’s life, it happens, you just gotta move on and press forward. We’re all going to die anyway. It’s something you don’t want to experience and you hurt from it, but at the same time you gotta do what you gotta do to keep pressing forward.

What was the atmosphere like at the Mitch Lucker memorial between all the bands and vocalists?
It was great. You could tell everybody was there to celebrate the life of an iconic, legendary singer. It was a really great moment for the metal scene and for people to come together and realize that life is short. It was really just a priveledge to be a part of it.

Did you get to select the song your performed?
They assigned me a song at first and then they asked me if that’s what I wanted to do or if I wanted to try something else. I told them what I prefered to do, but that I’d do whatever.

How were you able to connect with the song?
It was just really cool to step in the shoes of Mitch and see what it was like playing with his band from his point of view. It was just crazy to sing someone else’s song for the actual band on stage live.

What was the last thing you listened to before this interview and what’s your guilty-pleasure band to listen to?
Last thing I listened to was Katatonia and guilty pleasure band, he’s not a band, but I’d say Justin Timberlake.

That does is. Thanks for taking the time to speak with Yell! Magazine.
Thank you.