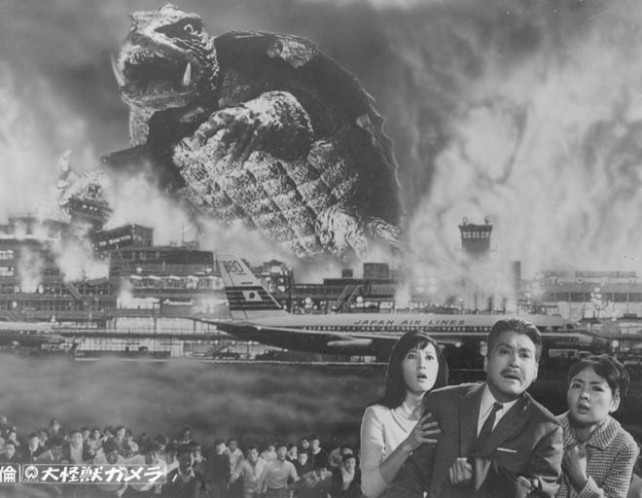 With the new Godzilla scheduled to come out on May 16, 2014, all but the most hardcore of fans have seemingly forgotten the Sammy Petrillo to Godzilla’s Jerry Lewis, Gamera. While primarily known to modern audiences for their appearances on Mystery Science Theater 3000, the Gamera films, upon re-watching, are actually pretty fun. But don’t think I’m using “fun” in the place of “good.” Each Gamera movie released before 1980 was made for about $7, and most featured child actors that should’ve had to pay the producers in order to get their roles. They’re terrible. Kids act in Gamera films like someone told them that expressing emotions would mean never seeing their parents alive again.

Mill Creek Entertainment is releasing three different sets on April 29, 2014, just in time for you to watch one Gamera movie a day in a baffling attempt to prepare for the new Godzilla. The first two sets, just being released on Blu-ray, each have four of the eight Showa Gamera films on them. The last set, to be released on DVD, has all 11 Gamera films from 1965 to 1999 (It doesn’t have 2006’s Gamera the Brave. Considering how that movie went, I’m sure you’ll be fine.) That includes the incredibly awesome, late ’90s Gamera trilogy. I know that the words “Gamera” and “awesome” don’t usually intersect (they’re actually biologically repellent to each other), but the late ’90s Gamera movies will wipe your mouth clean of the awful taste left by some of the early ’90s Godzilla movies. I’m looking at you, Godzilla vs. Mothra. You were garbage.

The two Blu-ray sets will cost $19.98 a piece, while the 11-film DVD set will cost, and try not to pee too much…$14.98. I would pay that much just for the last three films on the set. Even if a tragic accident behind a theater playing Gamera vs. Barugon is what made you take a vow against crime and become some weird Gamera Batman, it’s still a price that you can’t ignore.