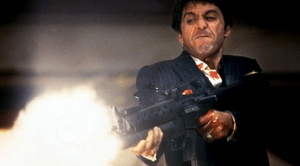 Chilean director Pablo Larrain has been handed the daunting task to reboot a modern-day telling of Scarface.

Last time we touched news about the Scarface reboot, there was talk that Harry Potter director David Yates was a potential candidate. Apparently he decided that Harry Potter was his rock bottom and didn’t want to sink any further. Seriously, despite the 1983 Brian De Palma Scarface being a remake of the 1932 Howard Hawk film, it’s a masterpiece. Some people say both of them are. So, who in their right mind would want to helm a reboot?

According to TheWrap, Chilean director Pablo Larrain (No) wants the task. Universal has also appointed Martin Bregman and Marc Shmuger to produce. Note that Bregman produced the 1983 Scarface.

While the lead role has yet to be given to an actor wishing to commit career suicide, the film is reportedly going to take place in modern-day Los Angeles — because it makes sense to have a Cuban drug lord reside in L.A. as opposed to Miami.

Are you guys feeling this Scarface reboot as much as we are? Hopefully you detect the “scarcasm.”