5 Reasons Why We Listen To Heavy Metal 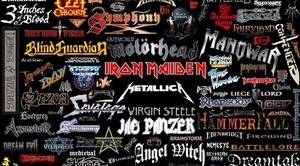 No.3 It’s a Lifestyle/Culture

For metal fans, heavy metal is more than a style of music; it’s who we are. Sure, as I’ve said before, most of us can and do appreciate other genres, but essentially we live and breathe metal. And we are some of the most opinionated, stubborn bastards about what we like — and we wear it like a badge of honor. How many metal fans don’t own a concert shirt? What other fanbase has made a band shirt a part of their wardrobe, uniform, fashion?

Concerts, big or small, are our churches. They are a part of our socialization. They are where we go to congregate with like-minded individuals. The stage is the pulpit, the band is the priest. We share stories, we drink our fill, we mosh, we bleed, we release. Here is where we feel most at home and accepted.

No.2 The Fans Are Real

Heavy metal fans are a rare breed. When we hear a band we like, we dig deeper; we find out who influenced that band and then we go listen to all that other shit. And we’re loyal, almost invariably for life. Christ, look at how Metallica has treated us through the years, yet we still buy their albums, go to their concerts, etc. Really, almost as soon as Coldplay ripped off Joe Satriani their fans gave up and the band dropped of the face of the planet.

By Einstein’s definition, yes, yes we are insane: “Insanity: doing the same thing over and over again and expecting different results.”

For the music/bands we love we fight, we argue, we travel long distances, we buy merch, and we mosh. Other fanbases do much of the same, but we do it a lot.

From writing their own material to mastering their instruments, heavy metal bands/musicians are infinitely more talented than the average pop, R&B, hip-hop, or country artist, on the whole. That’s pretty argumentative, I know, but if you look at the liner notes of just about any other genre of music, you won’t find the that the band wrote the songs. And when you think about who we name as the greatest drummer, guitarist, etc., which genre do they usually come from? Heavy metal and rock. That’s because metal musicians push the limits of their instruments, trying to achieve greater proficiency.

In my opinion, sampling an existing song, looping it, and putting a beat over it does not equal talent. That’s knowledge and the ability to use a computer/mixing board.