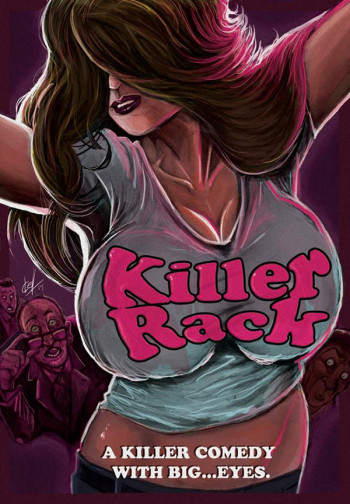 If the ’80s were great for anything, and they were great for a lot of things, they were great for horror comedies. And the soon-to-be-shot Paul McGinnis scripted Killer Rack appears to have taken a page right out of the ’80s’ rule book. I don’t think it’ll be as outrageous as Student Bodies, but certainly we can prep our palates with the likes of House, Saturday the 14th, and Once Bitten.

Gregory Lamberson (Slime City, The Jake Helman Files) has just announced that Killer Rack will be the next film he directs, which will start shooting in May and June. Arick Szymecki will handle the makeup effects while John Renna will take care of the gore.

I told him [Kelly] I was looking for something similar in tone to the posters for ’80s comedies like Zapped! and Valley Girl, and he got it right away. It’s a pretty surefire concept.

Killer Rack tells the story of Betty, a young woman who gets breast implants which turn out to be supernatural creatures with a ravenous taste for human flesh. Rochon will play Dr. Thulu, the surgeon who performs the augmentation surgery with an eye toward world domination.

Paul’s script won the Best Screenplay award at Buffalo Dreams Horror Film Festival in 2012, but we had a guest judge for that category, and I didn’t read the script until we discussed it during the filming of Dry Bones last year. It is hands down the funniest script I’ve ever read, and I told him I had to direct it. It will be the first script written by someone else that I’ve directed, which is something I’ve wanted to try for a long time. It’s a comedy first and a horror comedy second, with great characters, slapstick, and nerd humor. [It] becomes a horror comedy in the last act. It has an obvious sexploitation element but also really funny gags and characters people will love. Paul really nailed the concept. After Slime City Massacre, I asked Debbie what role was out there that she wanted to play, and she said, ‘a mad scientist,’ so when I read the script, I immediately thought of her to play Dr. Thulu, and Paul told me he wrote the part with her in mind. Kismet.

We’ll keep you posted about Killer Rack on Yell! Magazine.