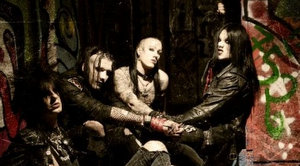 Sweden’s hard rockin’ sleaze act, Sister, have just announced the release date for Disguised Vultures, the follow-up to their previous full-length, Hated (2011). Prior to Disguised Vultures, however, Sister released the limited-edition 7″ color vinyl Sick, which contains the track “Sick” that also appears on the upcoming album.

If you haven’t seen the video for “Sick,” you need to do so now (in the video player above). Directed by Jimmy Johansson, the video features some homoerotic images of what could be interpreted as a blood bukake circle jerk. Add to that some men wearing latex pig masks, and you’ve got yourself a barn stomper. If you’re interested in the limited-edition Sick, you can still place an order via this link.

Sister has a distinguishable sound, even if their black metal look doesn’t match it. The band has a well-honed sleaze vibe with some strange power pop/glam metal combination that keeps them under control. If you liked Towers of London, you’re bound to like Sister.