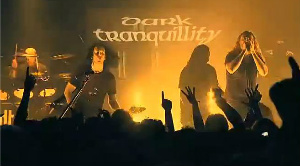 Friday night party music at its finest. Dark Tranquillity is this week’s featured artist on Yell! Magazine’s Full Concert Series (perhaps spurned on by the upcoming release of Construct).

Without a doubt, this band is one of the best melodic death metal bands out there (although, the more recent stuff flirts with progressive melodic death metal). Formed in 1989 in Gothenberg, Sweden, Dark Tranquillity released its first album, Skydancer, in 1993. Yeah, that was 20 fucking 20 years ago, and In Flames‘ Anders Fridén was Dark Tranquillity’s vocalist on that album. Shortly after that album’s release, Anders left and founding member Mikael Stanne has held the mic since.

Dark Tranquillity has continued to evolve musically through the years, but that doesn’t change the fact that they are perhaps one of the most underrated bands in their genre. This Live in Milan video will undoubtedly convince you of that.

Whether or not you’re anxiously anticipated the release of Dark Tranquillity’s 10th studio effort, Construct, you need to check out this live show as the band promotes their 2007 album, Fiction – it absolutely rules.