The Weinstein Company Developing Sin City As A TV Series 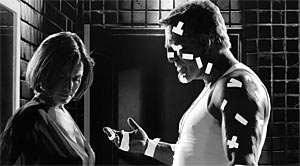 The long-awaited Sin City: A Dame To Die For had a release date change not too long ago, unfortunately, it won’t be out in theaters until the summer. However, before that time comes it sounds like Bob and Harvey Weinstein want to develop Frank Miller’s Sin City into a full-blown TV series with the help of Robert Rodriguez. According to The Weinstein Company, moving into the TV business is another way to add stability to the company.

In an interview with the New York Times, TWC revealed they are developing The Mist into a 10-episode TV series based on the film that was adapted from Stephen King’s novel of the same name, and that the Sin City TV series would follow after the events that takes place in A Dame To Kill For.

He is preparing a pilot based on the Scream films for MTV, for instance, and developing a proposed 10-part series with Frank Darabont, based on Dimension’s film version of Stephen King’s The Mist.

Mr. Weinstein said he was also hoping to quickly follow the August release of the film Sin City: A Dame to Kill For, directed by Frank Miller and Robert Rodriguez, with a Sin City television series from Mr. Miller and Mr. Rodriguez.

There’s no word yet on casting or when production will begin for the Sin City TV series. At the moment, all we know is A Dame To Die For is set for release on August 22, 2014.