UFC 170: Jon Jones Pulled Out Of Fight With Glover Teixeira 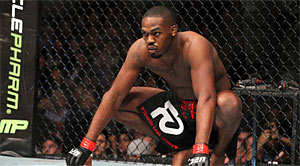 If you didn’t follow the pre-fight presser for UFC 167 yesterday, then you most likely missed the breaking news about UFC Light Heavyweight Champion Jon Jones.

UFC President Dana White confirmed that UFC 170’s main event is already in jeopardy because Jones won’t be defending the strap against No.1 contender Glover Teixeira on February 22nd, at The Mandalay Bay Events Center in Las Vegas, Nevada.

White did not disclose why Jones won’t be fighting on the UFC 170 card, however, he did indicate that the main event will be replaced with a new fight and will be announced shortly. Apparently, Jones vs. Teixeira will be set some time in March 2014.

As soon as more details are announced on why Jones pulled out, we’ll make sure to report it here on Yell! Magazine. So stick around for more news about UFC 170.