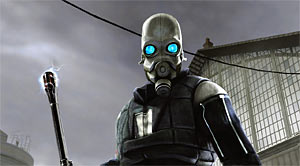 Those of you keeping up with the world of PC gaming know that Valve revealed and plans to launch its video game console — called the Steam Machine, including the related SteamOS and Steam Controllers — some time at the beginning of 2014.

With that happening sooner than later, you might be wondering if Valve plans to go the exclusive route like the Xbox One and PlayStation 4. According to Valve designer Greg Coomer, the company has no intention to keep games like the unconfirmed FPS Half-Life 3 exclusive to the Steam Machine or SteamOS.

We think that customers are everywhere, and they want to put their games wherever customers are. That would go against our whole philosophy, to launch something that’s exclusive to SteamOS or Steam machines.

Valve continues to encourage developers to put their games “in as many places as possible, including not on our platforms.” Lastly, an app exclusive for the SteamOS goes against Valve’s philosophy as well.

You won’t see an exclusive killer app for SteamOS from us. We’re not going to be doing that kind of thing.

As for Half-Life 3, Valve still hasn’t officially confirmed the game yet, but there’s talk about doing a movie. We’ll keep you posted on further news regarding the series in the near future.