Pentagram Chile Drop “The Apparition” And Lift The Curse 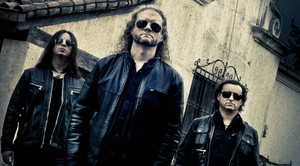 There’s a Pentagram curse. Any band that uses this word in its name is destined to be unheard of until the dusk of their career approaches.

We all know about the American doom metal Pentagram fronted by Bobby Liebling, and if you’ve seen Last Days Here you know how horribly this curse can destroy greatness. OK, that’s a bit of an exaggeration. Yes, Liebling’s music is great, but what of this Pentagram Chile? And why haven’t you ever heard of them?

Who takes 28 years to release their debut album?

Whether their music is “great” is a matter of opinion, but it can’t be argued that this is the music of some hack band that’s finally getting a pity album release some 28 years after their formation. That’s right, Pentagram Chile formed way back in 1985 — actually, Pentagram formed back then, as they didn’t change their name to Pentagram Chile until 2012 in order to avoid confusion with Liebling’s Pentagram.

Also right is the fact that their upcoming album, The Malefice, due November 12th, will be Pentagram Chile’s debut full-length. However, despite numerous attempts at reforming, the band has managed to pull together a number of demos, an EP, two live albums, and two compilations. And with that EP and those demos circulating in the heavy metal tape-trading community, Pentagram (Chile) managed to leave their mark and influence a number of bands: At The Gates, Dismember, Napalm Death, Darkthrone, entombed, and more.

There’s a definite old-school flavor in “The Apparition,” while it maintains its relevance in today’s scene. It’s heavy throughout, but at times it’s thrashy and at others very sludgy all as it orbits the death genre. Of course it doesn’t hurt that it sounds like Slayer at time, this fact even admitted by Pentagram Chile’s guitarist/vocalist Anton Reisenegger:

‘The Apparition’ must be one of my favorite tracks on the album because it has this amazing early Slayer vibe. Haunting the Chapel is still my favorite Slayer record ever and was a huge influence on our demos, so this is kind of a tribute. The vocal reverb actually sounds a lot like ‘Hell Awaits’ as well. The lyrics are about hidden fears and superstitions, which often run deep in a family’s history. I tried to evoke pictures of an old, decaying house as a symbol for those fears.

If you like “The Apparition,” and if you can pull yourself away from playing it again, check out “La Fiura,” the first track released from The Malefice.

The Malefice was cursed too

Recording The Malefice began in 2011, but its release was pushed back a year because of issues with the drum tracks. At this point, Pentagram Chile teamed up with Chilean drummer Juan Pablo Donoso and officially changed its name. The album was finally completed in early 2013.

Now, Pentagram Chile will co-headline London’s Live Evil Festival in October. The band is also working on a book to document their improbable and turbulent history.